Do You Have SIBO Symptoms?

Here Is What You Need to Know! 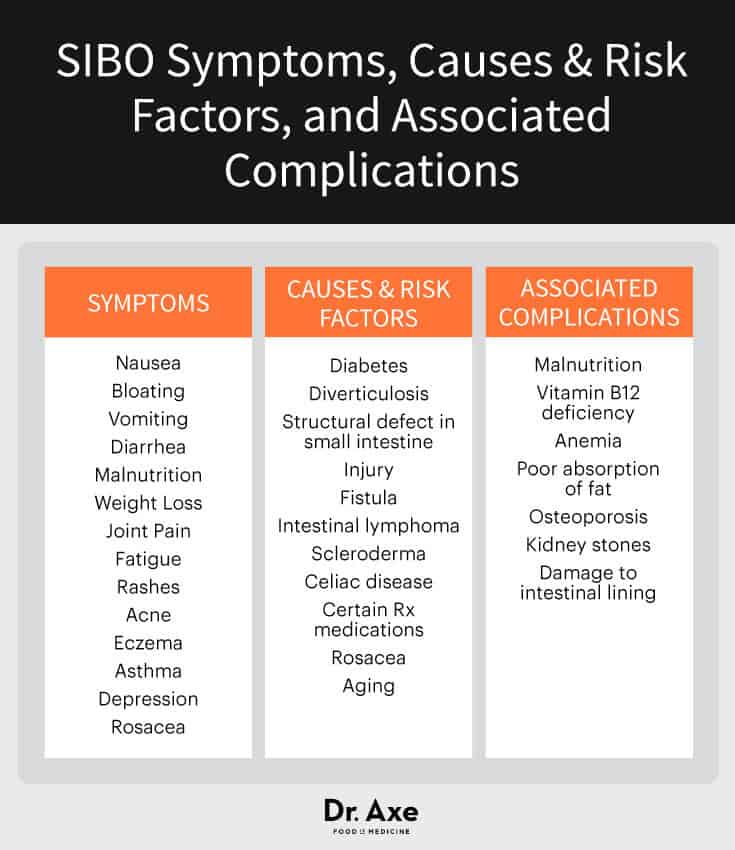 Millions of Americans suffer from gastrointestinal symptoms and distress each year. Diagnoses of leaky gut syndrome, Crohn’s and celiac disease, and irritable bowel syndrome (IBS) continue to grow, and researchers still can’t quite put their fingers on why our digestive systems are under attack.

Recently, researchers have started to acknowledge there’s another digestive disorder lurking: small intestinal bacterial overgrowth, or SIBO. It’s more prevalent than previously believed, and it occurs in many people suffering from IBS and certain other underlying conditions. (1)

SIBO is the acronym for “small intestinal bacterial overgrowth,” defined as excessive bacteria in the small intestine, or small bowel. While bacteria naturally occurs throughout the digestive tract, in a healthy system, the small intestine has relatively low levels of bacteria; it’s supposed to be at highest concentrations in the colon. (2)

The small intestine is the longest section of the digestive tract. This is where the food intermingles with digestive juices, and the nutrients are absorbed into the bloodstream. If SIBO is indicated, malabsorption of nutrients, particularly fat-soluble vitamins and iron, can quickly become a problem.

When in proper balance, the bacteria in the colon helps digest foods and the body absorb essential nutrients. However, when bacteria invades and takes over the small intestine, it can lead to poor nutrient absorption, symptoms commonly associated with IBS, and may even lead to damage of the stomach lining.

When you have SIBO, as food passes through the small intestine, the bacterial overgrowth interferes with the healthy digestive and absorption process. The bacterium associated with SIBO actually consumes some of the foods and nutrients, leading to unpleasant SIBO symptoms, including gas, bloating and pain.

Even when treating small intestinal bacterial overgrowth with antibiotics, relapse rate is high. This is a chronic condition that can be cured, but it takes patience, perseverance and a change in diet. In fact, SIBO treatment includes a healing diet, and some foods should be avoided until the gut flora is back in balance.

The indications of SIBO mirror the symptoms of other gastrointestinal disorders, including IBS. According to a study published in the World Journal of Gastroenterology, there’s good reason for the similar symptoms — there’s a definite association between IBS and SIBO. Researchers suggest that physicians give consideration of excluding SIBO before giving a definitive diagnosis of IBS. (3)

Common symptoms of SIBO and IBS include:

Causes and Risk Factors of SIBO

There are a number of underlying conditions believed to contribute to small intestine bacterial overgrowth. These include aging, dysmotility (when muscles in the digestive system don’t work properly), chronic pancreatitis, diabetes, diverticulosis, a structural defect in the small intestine, injury, fistula, intestinal lymphoma and scleroderma. (4)

The use of certain medications, including immunosuppressant medications, proton pump inhibitors, immune system disorders, recent abdominal surgery and celiac disease are also associated with an increased risk for developing SIBO. Celiac disease can be of particular concern as it disturbs gut motility leading to improper small intestine functioning. (5)

According to a study published in the American Journal of Gastroenterology, 66 percent of patients with celiac disease who maintained a strict gluten-free diet tested positive for bacterial overgrowth.

In this study, patients were treated individually with a combination of antibiotics, prescription medications for worms and parasites, and a change in diet. All patients reported their symptoms were abated after SIBO treatment. (6)

Another underlying cause of SIBO symptoms is blind loop syndrome. This occurs when the small intestine actually forms a loop, causing food to bypass parts of the digestive tract. This causes food to move more slowly through the system, and the result is a breeding ground for bacteria. (7)

Metabolic disorders, including type 2 diabetes that’s not properly controlled, are believed to lead or contribute to certain gastrointestinal disorders. In fact, a study published in Diabetes & Metabolism indicates that SIBO was present in 43 percent of diabetics with chronic diabetes. (8)

Aging is another risk factor for developing small intestine bacterial overgrowth. As we age, the digestive tract slows down. It’s generally accepted that non-hospitalized adults over the age of 61 have a 15 percent prevalence rate of SIBO, in contrast with just under 6 percent in individuals 24 to 59 years old. A study published in the Journal of the American Geriatric Society also found that over 30 percent of disabled older adults have SIBO. (9)

Rosacea, a skin condition that causes redness and rashes on the face, (10) is also associated with SIBO symptoms. Researchers from the Department of Internal Medicine at the University of Genoa in Italy found that rosacea patients have a significantly higher prevalence rate of SIBO.

For those who suffer with rosacea, there’s good news — this study also indicates “an almost complete regression of their cutaneous lesions and maintained this excellent result for at least 9 months” after the eradication of SIBO. (11)

As you can see, small intestinal bacterial overgrowth is linked, caused or associated with a wide array of conditions. Even those not thought to be related to the gastrointestinal tract seem to correlate with SIBO symptoms.

In order to diagnose SIBO, doctors use a hydrogen breath test to measure the amount of gas produced by the bacteria in the small intestine. The test measures the amount of hydrogen and methane in your body. This works because the only way the human body produces these gases is through the output of bacteria.

A solution containing one of the following sugars is used to complete the breath test:

First the patient participates in a special diet for two days prior to the test. Then the patient drinks a solution containing one of the sugars listed above, which feeds the bacteria. The breath test measures how much hydrogen and methane has been produced by the bacteria as a result. These results allow your health care professional to determine if you are experiencing SIBO. (12, 13)

SIBO, left untreated, can cause potentially serious health complications. It’s vital to get rid of the bacterial overgrowth as soon as possible.

These deficiencies can lead to symptoms, including weakness, fatigue, confusion and damage to the central nervous symptom. (14)

Vitamin B12 deficiency is more common than most people believe. There are a number of factors that can lead to deficiency, besides SIBO. Vegetarians and vegans are at particular risk, as are individuals who have inadequate stomach acid or take medications that suppress stomach acid — such as proton pump inhibitors, H2 blockers and other antacids.(15)

As noted above, these commonly prescribed medications are linked to SIBO.

According to Harvard Medical School, the symptoms of vitamin B12 deficiency can appear gradually — or very rapidly. Symptoms may include numbness or tingling in extremities, anemia, jaundice, decline in cognitive function, memory loss, fatigue, weakness, and even paranoia or hallucinations. (16)

In a report in the British Journal of Haematology, researchers indicate that megaloblastic anemia, a blood disorder that causes the loss of red blood cells, is directly related to bacterial overgrowth in the small intestine. This is due to the malabsorption of vitamin B12. (17)

If you experience any of these symptoms of vitamin B12 deficiency, in addition to any of the common SIBO symptoms mentioned above, take charge of your health, and get started ridding your body of small intestinal bacteria.

B12 can not!  be taken alone.  Many more symptoms and problems will happen if  you do.   Please do not get a B12 shot!  The chemicals in this medication will wreck you intestinal flora.

Small intestinal bacterial overgrowth is most often treated with antibiotics such as rifaximin (brand name Xifaxan). This helps reduce the problem bacteria but also kills off the healthy bacteria necessary for proper digestive functioning. For some patients with SIBO caused by blind loop syndrome, long-term antibiotic courses may be required. (19)

Even with antibiotics, SIBO is difficult to treat. In fact, a study published in the American Journal of Gastroenterology, researchers concluded SIBO patients treated with antibiotics have a high recurrence rate and that gastrointestinal symptoms increased during the recurrences. (20)

The good news is that researchers have found that herbal remedies are as effective as three courses of antibiotic therapy in patients who don’t respond well to rifaximin. (21) This study mentions a variety of herbal remedies but doesn’t include dosing or further details. Oregano oil, berberine extract, wormwood oil, lemon balm oil and Indian barberry root extract are all mentioned in the study.

So how do you treat SIBO and SIBO symptoms? First, it’s important to identify if there’s an underlying cause. The next step is to start reversing the nutritional deficiencies. A healthy diet, nutritional supplements and lifestyle changes are necessary to get the body back in balance.

My first recommendation to overcome SIBO is to consume smaller amounts of food during meals. Spread your meals out at 5–6 smaller portions per day rather than 3 larger meals. Eating smaller meals allows you to digest foods more quickly, which is crucial to overcoming SIBO. Overeating is one of the worst things for SIBO because it causes food to sit longer in the stomach and can also damage gastric juice production. Low stomach acid production is one of the main contributing factors of SIBO because stomach acid kills off bacteria in your upper GI regions.

Next, one of the key things you can do today to help get rid of small intestinal bacterial overgrowth is to start probiotic supplements and eat probiotic-rich foods immediately. A pilot study from researchers at the Center for Medical Education and Clinical Research in Buenos Aires, Argentina, found probiotics have a higher efficacy rate than metronidazole for individuals with SIBO. (22)

In this study, Lactobacillus casei, Lactobacillus plantarum, Streptococcus faecalis and Bifidobacterium brevis were administered for five days to half of the study group, while the other half of the study group received antibiotics for five days. All participants ate the same diet, which limited consumption of dairy products, legumes, leafy green vegetables and alcohol.

In addition to probiotics and combatting nutrient deficiencies, it’s important to change your diet.

Please do not take it upon yourself to figure out your condition or to treat yourself.  You must work with a holistic healthcare provider, and your primary care doctor may have one to recommend.    Look for a provider in preventative medicine, functional medicine, or regenerative medicine.