5 Reasons To Use Soap Nuts For Laundry, Cleaning & More

Most of us are still using traditional laundry soap to make our clothes smell fresh and clean, and while they’re obviously effective, they come at a big price, and not just what you see on the sticker at the store. Conventional laundry soaps often contain toxic chemicals with a wide range of negative effects including everything from skin irritation to carcinogenicity. And, frighteningly, in 2011, researchers from the University of Washington found that dryer vents can emit over 25 volatile organic compounds when scented laundry soap and dryer sheets are used, including seven that are classified as hazardous air pollutants.

The average family does about 8 loads of wash every week, or over 400 loads every year, which means around 17.5 billion cups of laundry detergent are being used each year in the U.S. alone. That’s a lot of chemicals to come in contact with – not only can you come in contact with these toxic chemicals by wearing your clothing that’s been laundered with them, you’re probably breathing them into your lungs when they become airborne while you’re doing your laundry. Some of the worst offenders when it comes to laundry chemicals includes:

These chemicals aren’t just potentially damaging to your health, but they are also harming the health of our environment and contaminating our waterways The Journal of Oleo Science reported that a laundry detergent concentration of only 2 ppm can cause fish to absorb double the amount of chemicals they would ordinarily absorb. The accumulation of these compounds in our waterways and groundwater is having a significant negative effect on our wildlife.

According to the Environmental Working Group’s Skin Deep: Cosmetic Safety Reviews, research studies on laundry detergent chemicals like SLS have shown an association with everything from minor to major health issues, like skin and eye irritation, organ toxicity, developmental or reproductive toxicity, possible mutations, cancer, endocrine disruption, neurotoxicity, and biochemical or cellular changes.

How To Replace Your Laundry Detergent With Soap Nuts

Thankfully, there are soap nuts. Soap nuts, which may also be referred to as soap berries, are an all natural alternative to potentially harmful laundry detergents, and they have a number of other uses too.

This berry-like fruit grows on the Sapindus Mukorossi tree, native to India and the Himalayas. The berries produce a soap called saponin, which operates as a natural surfactant. The soap nut shell absorbs water and releases the saponins which circulate in the wash water, freeing dirt, grime, and oils from clothing.

Soap nuts can also be used to clean dishes, as a shampoo to wash your hair, or for surface cleaning. They’re 100 percent natural and biodegradable and don’t contain any pesticides, as insects are naturally repulsed by saponin so there is no need to use them in cultivation. They are completely safe for septic systems, gentle for use on sensitive skin, including baby clothes, and are also antimicrobial.

Where To Buy Soap Nuts

Soap nuts are rapidly gaining in popularity as more and more consumers realize what a great natural laundry detergent alternative they are. You may now find soap nuts in your local natural grocery store, but they are also abundant online, particularly Amazon.

Cocoboo offer the best reviewed and most affordable soap nuts from  Amazon. They sell a variety of bag sizes here – the bigger the bag you buy, the cheaper it is. 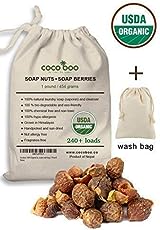 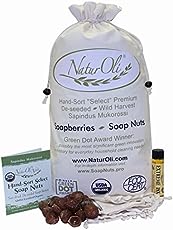 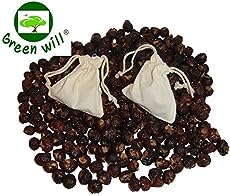 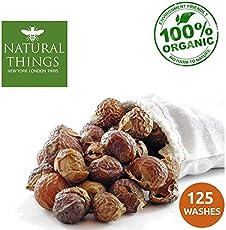 How To Use Soap Nuts For Laundry

To use them as a laundry soap, place 5 to 6 soap nuts in a muslin bag – you can buy wash bags designed for soap nuts . Alternatively, many of the soap nuts you buy on Amazoncome with a wash bag.

You can wash in any temperature, although higher temperatures tend to be more effective as the heat aids in releasing the saponins. After washing, remove the bag or sock and allow it to dry. They can be used several times, until the shells become soft and gray, or test them by squeezing when wet. If you can squeeze out a foamy, honey-like liquid they can be used again. It’s best to use new soap nuts for heavy and/or, especially dirty loads.

How Much Cheaper Is It?

On Amazon , Tide PODS Liquid Laundry Detergent Pacs are selling at a price that yields a cost per load of $0.23.

Consider teaming up with a friend, family member or neighbor and buying soap nuts in bulk to enjoy the significant savings, the brilliant environmental benefits and the other brilliant uses for soap nuts we share below.

Just like laundry detergent and many other cleaning as well as personal care products, dishwashing soap has been found to contain numerous toxic chemicals; in fact, liquid dish soap is said to be the leading cause of poisonings in the home for children under the age of 6.

To use soap nuts as an alternative to standard dish soap, all you have to do is boil them in water for about 10 minutes, which creates a thin liquid. The general formula calls for about 12 soap nuts boiled in 2 cups of water. Adding a few drops of distilled lemon essential oil will provide a fresh, pleasant scent, though it’s completely optional. (Make sure the lemon oil is distilled to avoid photosensitivity after contact with your skin). You can use also use the liquid to clean countertops and other surfaces.

A 2013 study conducted by the Center For Environmental Health, found cancer-causing chemicals in 98 shampoos, soaps and other personal care products sold across the nation by major retailers. One of the most common was cocamide DEA (cocamide diethanolamine), which is a chemically-modified form of coconut oil used as a thickener or foaming agent and listed by the state of California as a known carcinogen in 2012. If you buy conventional shampoo, there’s a good chance it’s there.

Even if you’ve tried natural shampoo alternatives, and didn’t find any that worked for you, soap nuts is well-worth a try as many find it to be ideal. To make it using soap nuts, you’ll need the following:

Boil the soap nuts in the small muslin bag by placing it into 2 cups of boiling water. Reduce the heat and simmer for about 20 minutes. Add one more cup of water, and the 5 drops of lavender essential oil. Simmer for an additional 10 minutes, and then remove the liquid from the heat. Squeeze out the bag until it begins to produce a foamy liquid; rinse with cool water and squeeze it into the pan again. To use, massage a small amount into your hair and allow it to sit for 5 minutes. Rinse well. The shampoo can be stored in a glass jar in the refrigerator until you’re ready to use it again.

You can use this shampoo for a liquid body wash or face wash too. Just add a little to your washcloth and wash as usual.

You probably know how nasty it feels, and smells, to put DEET sprays on your body to repel mosquitoes and other insects. And this chemical that was developed during the Second World War, used by the U.S. Army in jungle warfare, not only feels and smells that way, but it truly is. Studies have found that it can result in all sorts of negative health effects, like rashes, skin irritation, numb or burning lips, nausea, headaches, dizziness, and difficulty concentrating. From 1961 to 2002, the Agency for Toxic Substances and Disease Registry reported eight deaths related to DEET exposure. While three of the fatalities resulted from deliberate ingestion, five occurred following DEET exposure to the skin in both adults and children. It’s not good for your pets either, who can lick it off and ingest it, and, on top of that, it’s becoming a lot less effective too. A landmark study recently demonstrated that while the insects are initially repelled by it, they ignore it if they’re exposed to it again.

Instead of using DEET, use soap nuts! It’s not only safe for you but for infants, children and even pets as it’s entirely natural. Soap nuts contain saponin, and the smell naturally repels insects, including mosquitoes.

Follow the same formula as you would for dish soap, boiling 12 soap nuts in 2 cups of water – instead of adding lemon essential oil, add a few drops of lavender or tea tree oil for extra bug-fighting power.

You can purchase soap nuts from many local grocery stores as the popularity of these powerful little berries increases.

Alternatively, Amazon have a number of suppliers selling soap nuts. This brand of Cocoboo soap nuts is the best reviewed and at the most affordable price and they also have a number of different sizes available.