The Secret to a Harder Erection Is in Your Fridge

Something that you can do in your sleep would seem to be pretty simple, but getting an erection is actually a complicated business—a complex biomechanical process that requires your body to be firing on all cylinders, three to be exact. (Note: It’s best not to think of this as a “complicated business” when the moment presents itself.) First, testosterone, which fuels male arousal, should be pumping at healthy levels. Second, a strong immune system will scrub away free radicals, keeping arteries clear and free of inflammation. Third, blood vessels should dilate easily so that blood pressure is regulated and blood flows easily. This last mechanism relies on the production of one chemical, nitric oxide, which, not coincidentally, is the key target of all the major pharmaceutical treatments for erectile dysfunction (the accursed ED), from Cialis to Viagra.

Simply put, a healthy heart equals a healthy penis. “If your cardiovascular system is impaired, your penile health is impaired, and the reverse is true as well—it’s one system,” says Steven Lamm, M.D., a clinical assistant professor at New York University School of Medicine and the author of The Hardness Factor. “The endothelial cells that line your coronary arteries line all the arteries in your body, including the arteries that go to the penis.”

Your endothelial cells are crucial for releasing nitric oxide—and good nutrition is one of the central factors influencing its production, according to a study in the American Journal of Cardiology. Which is good news, since ED pills come with an ever-growing list of side effects: heartburn, chest pain, memory loss, vision loss, and hearing loss. “The right foods will help you stay well and reverse small vascular abnormalities before you have no choice but to use medications,” Lamm says.

15 Foods You Need For Your Penis to Perform

A crappy diet can do more than wreck your waistline—it can also sink your erection, too.

Think about it: Some of the smallest blood vessels and nerves in your body can be found in your penis, says Jamin Brahmbhatt, M.D., a urologist at Orlando Health. So if you’re slamming down junk like pizza and fries every day, your blood vessels down under may be some of the first to get clogged up with fat and cholesterol.

This restricts blood flow to your penis, preventing you from getting hard when you’re ready for action and even putting your heart health at risk down the road, too.

It may sound wacky, but you should treat your penis like a luxury car, says Dr. Brahmbhatt. To keep your ride running smoothly, you need to fill it with the recommended fuel and keep up with the suggested maintenance. Well, your penis needs the same—like healthy foods and plenty of exercise—to keep it going strong, he says.

Filling up with the right foods can boost your testosterone, strengthen your sperm, and supercharge your erection. So, what would we recommend as premium fuel? These 15 foods are a good place to start. 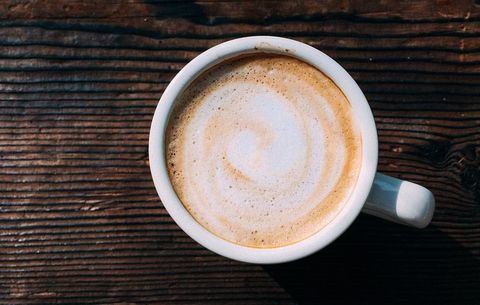 Your morning coffee may protect you from going limp later, according to a study of more than 3,700 men from the University of Texas Health Science Center at Houston.

Those who downed the equivalent of 2 to 3 cups of a coffee a day—between 170 to 375 milligrams (mg) of caffeine—were less likely to report erectile dysfunction (ED) issues than men who skipped their cup of Joe.

Why? Caffeine triggers a series of effects in your body that help the arteries in your penis relax and blood flow to increase, producing an effect similar to ED drugs like Viagra, the study authors explain. 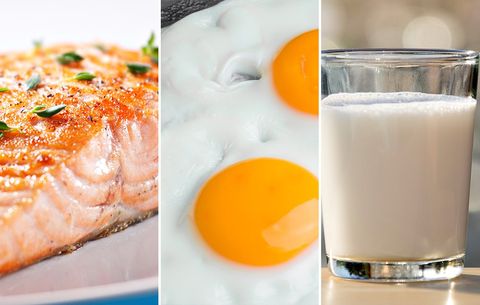 Your D needs vitamin D, suggests one Austrian study—and the foods above are great sources of it.

After researchers had men take either 3,332 IU of vitamin D or a placebo per day for a year, they found that free testosterone levels—the powerhouse behind your sex drive—significantly increased in guys loading up with vitamin D

Plus, insufficient D levels may also increase your risk for erectile dysfunction, Italian researchers found. When you don’t get enough vitamin D, you produce free radicals that decrease nitric oxide in your body, a compound that helps your blood vessels function, the researchers say.

Without it, your blood vessels can’t relax, hindering the flow of blood to your penis. That makes it difficult for you to get hard, says Men’s Health urology advisor Larry Lipshultz, M.D., chief of male reproductive medicine and surgery at Baylor College of Medicine. (Here’s another reason you should get your vitamin D levels checked.)

So how much D do you really need? That’s still up for debate: The National Institutes of Health recommend getting 600 IU daily, while the Endocrine Society notes that some people may need to go much higher with 1,500 to 2,000 IU a day. Talk to your doctor to find out what works best for you.

You can not take Vitamin D alone.  If you doctor does not know what to take with it, run! 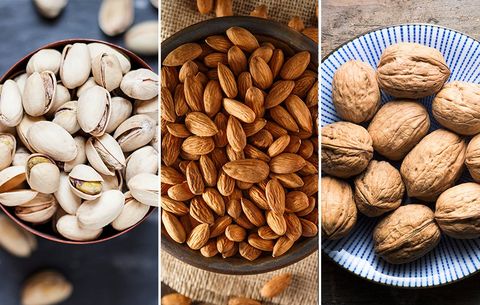 Need a snack? Choose nuts, researchers from Turkey suggest. After 17 men with ED ate 100 grams of pistachios for three weeks, they all reported a significant improvement in their erectile function, ability to orgasm, libido, sexual satisfaction, and overall happiness in life. As a bonus, they all had higher HDL, or “good,” cholesterol and lower LDL, or “bad,” cholesterol, too.

Pistachios contain a high amount of an amino acid that boosts nitric oxide in your body, the researchers say. And like almonds, walnuts, and most other nuts, they’re a great source of healthy fats, which are good for your heart and therefore your penis, says Dr. Brahmbhatt. 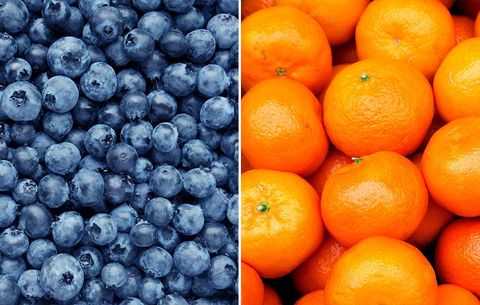 Only 13 percent of Americans eat enough fruit, according to the Centers for Disease Control and Prevention.

Big mistake: Eating enough of the right ones can work wonders below the belt.

In a 10-year study of more than 25,000 men, Harvard University researchers found that men who ate foods packed with certain flavonoids—anthocyanins, flavanones, and flavones—had a lower ED risk than guys who didn’t eat as much of them. The effect was particularly strong among those under 70 years old.

In fact, men who ate flavonoid-rich foods—like blueberries, strawberries, apples, and citrus fruits—a few times a week reduced their ED risk by 9 to 11 percent compared to those who ate them less frequently. The researchers speculate that flavonoids found in these foods may help improve the health of your blood vessels by relaxing your arteries.

Bonus points if you like to break a sweat: Men who were physically active (consider that 2 to 5 hours of brisk walking a week) and ate flavonoid-rich fruits reduced their ED risk by 21 percent.

So make sure you‘re fitting enough in your diet: The U.S. Dietary Guidelines recommend consuming two cups of fruit every day. 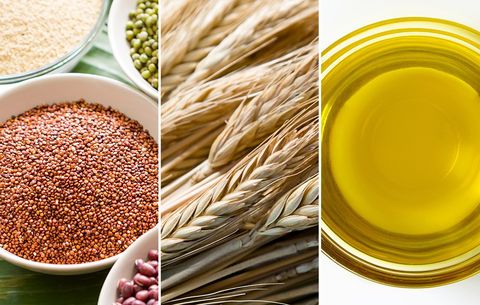 Since the Mediterranean diet is good for your heart, it’s not exactly surprising that it may benefit your penis, too. Heart disease is actually one of the most common causes of ED. Once plaque starts to build up in your blood vessels, the ones in your penis are the first to get blocked up.

So to truly test the diet’s benefits, Italian researchers had 35 men with diagnosed with ED and metabolic syndrome—a group of factors linked to heart health problems—load up their plates with lots of fruits, vegetables, whole grains, olive oil, and fish. Another 30 men with metabolic syndrome followed a control diet.

After 2 years, about one third of the men following the Mediterranean diet regained normal sexual functioning and saw lower levels of inflammation in their bodies.

Researchers aren’t exactly sure why the diet could help men with ED, but they believe the combination of eating more fiber-filled and antioxidant-rich foods may have anti-inflammatory properties, which helps promote healthy blood flow, the study authors say.

And you don’t have to be dealing with heart problems to notice the diet’s benefits in the bedroom. Men who eat lots of monounsaturated fats (a Mediterranean diet staple), like fish and nuts, also have the highest levels of testosterone, research suggests. 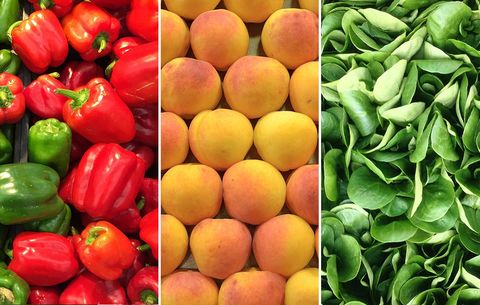 Vitamin C is key for healthy sperm, according to research from the University of Texas Medical Branch.

In the study, researchers divided 75 men—all heavy smokers with poor semen quality— into three groups. One group took 200 mg of vitamin C, another took 1,000 mg, and the last group took a placebo.

After four weeks, the 200-mg group improved their sperm quality by 15 percent, meaning they not only had a higher sperm count, but their sperm were able to swim more efficiently and survive longer, too.

What’s more, the 1000-mg group more than doubled that by 40 percent. Vitamin C seems to protect your sperm’s DNA from cell-damaging free radicals, the researchers say. That’s important, since damaged sperm might mess with your ability to conceive when you’re ready to have a kid.

Aim for a minimum of 90 mg and no more than 2,000 mg of vitamin C a day, suggests the National Institutes of Health. While the participants in the study popped a supplement, you can easily get your daily dose through vitamin-C rich foods, like yellow peppers, peaches, and spinach.