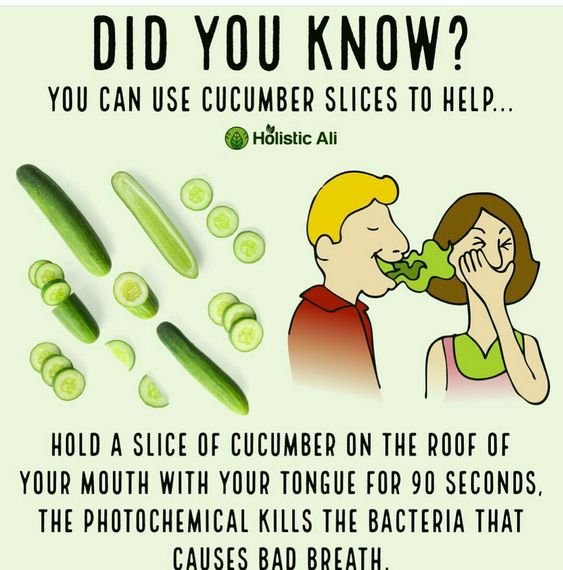 Bad breath can be caused by bacteria from decaying food particles or debris in the mouth or can occur as the result of poor oral hygiene. To freshen your breath naturally, consider:

Parsley has been cultivated for more than 2,000 years and is native to the Mediterranean. In ancient Greece, the herb was used to make crowns given to honor athletes as well as for decorating tombs.

It is thought to be the ancient Romans who first used parsley as a garnish, and though it later (likely during the Middle Ages) become popular as a seasoning, its role as a garnish has held strong to the modern day.

In the US, many still believe parsley is only useful as a garnish, leaving behind this nutrient-dense superfood as though it’s a bit of waste on their plate. Parsley is actually extremely healthy and deserving of being added to just about any dish you can think of.

There is also a widely held belief that parsley is served as a garnish because of its breath-freshening properties … but does parsley really cure bad breath?

Parsley’s bright green color and “green” grassy taste come from its high levels of chlorophyll. This compound has antibacterial and deodorizing properties. A study conducted in 1950 by Dr. Howard Westcott found that 100 milligrams (mg) of chlorophyll neutralized bad breath and odors from perspiration, menstruation, urine, and stools.1

In 1980, a study of elderly nursing home patients similarly found that consuming chlorophyll tablets helped control body odors.2 As far as chewing actual parsley goes, more recent research showed the herb may help reduce “garlic breath” through a process of “enzymatic deodorization.” According to the Journal of Food Science:

“Enzymatic deodorization involved oxidation of polyphenolic compounds by enzymes, with the oxidized polyphenols causing deodorization. This was the probable mechanism in raw apple, parsley, spinach, and mint treatments.”

The research on parsley’s (and chlorophyll’s) effectiveness for bad breath is conflicting, however. The above-mentioned study found, for instance, that chlorophyll treatment demonstrated no deodorization compared to the control.

And in separate research, while green tea turned out to be quite effective at reducing bad breath, mints, chewing gum and parsley-seed oil did not. That being said, research on this is limited, and there’s no harm to giving it a try. If you find parsley works for you, there’s no reason not to use it.

In a pinch, it seems chewing on parsley might help to cover up bad breath temporarily, but it isn’t a cure-all. The more compelling reason to add parsley to your diet is for its health benefits beyond possibly freshening your breath.

Parsley Is an Antioxidant-Rich, Disease-Fighting Superstar

Parsley contains a unique combination of volatile oil compounds, including myristicin, limonene, eugenol, and alpha-thujene. It’s also rich in flavonoids such as apiin, apigenin, crisoeriol, and luteolin. Both the volatile oils and flavonoids in parsley contribute numerous health benefits.

Myristicin, for instance, may inhibit tumor formation and activate glutathione, your body’s most powerful antioxidant that keeps all other antioxidants performing at peak levels. As reported by the George Mateljan Foundation:

“The activity of parsley’s volatile oils qualifies it as a ‘chemoprotective’ food, and in particular, a food that can help neutralize particular types of carcinogens (like the benzopyrenes that are part of cigarette smoke and charcoal grill smoke).”

The apigenin in parsley has even been shown to inhibit breast cancer cells and shrink breast cancer tumors. The luteolin in parsley, meanwhile, may calm inflammation in your brain, which is a primary cause of neurodegeneration.

Luteolin has also been linked with lower rates of age-related memory loss in mice.

Parsley is also high in fiber, and if you eat enough of it (more than a couple of sprigs with your meal) it is a useful digestive aid. Traditionally, parsley tea has been used to treat colic, indigestion, and gas. And, because of its rich chlorophyll content, parsley may help to cleanse and detoxify your body. In fact, chlorophyll is known to:

Assist you in processing more oxygen Cleanse key elimination systems like your bowel, liver, and blood Help purify your blood and cleanse away toxins

Promote growth and repair of your tissues

How to Use Parsley: Much More Than a Garnish

If you’re new to parsley, you needn’t be intimidated. Its fresh, “green” flavor is mild and helps to bring out other flavors in your cooking. There are two popular varieties: flat-leaf parsley, which is less bitter but stronger in flavor, and curly, which is slightly more bitter.

They can be used interchangeably in your dishes, depending on your preference, although flat-leaf parsley’s flavor tends to hold up better to cooking. Fresh parsley has a much more intense and brighter flavor than dried parsley. Wash it by swishing it in a bowl of water just before use.

Chopped parsley can be added to salads, vegetable dishes, and fish, or add it to burgers or meat loaf. It works well in many types of sauces, including tomato sauce and pesto, or as a rub for fish, chicken, lamb, or beef. You can also add it to soups, stews, and casseroles.

One of the simplest ways to get more parsley into your diet, however, is to add it to your vegetable juice. A bunch of parsley is simple to juice and represents a concentrated source of nutrients. Better still, parsley is incredibly easy to grow. It works well in pots on your patio, or you can plant it in your garden for your own ready-to-pick stash.

Freshening Your Breath from the Inside Out

Proper dental hygiene is important for optimal health in your mouth and in the rest of your body, as discussed by Dr. Bill Osmunson in the interview above. Halitosis, or bad breath, is typically caused by systemic diseases, gastrointestinal and/or upper respiratory tract disorders, and microbial metabolism from your tongue, saliva or dental plaque—all of which are indicators of systemic unbalance.

The key to remedying it is making changes to your diet and proper dental care: good old brushing and flossing. By avoiding sugars and processed foods, you help prevent the proliferation of the bacteria that cause decay and odor in the first place.

Eating fermented vegetables is another simple “trick.” Fermented vegetables are loaded with friendly flora that not only improve digestion but alter the flora in your mouth as well. I also highly recommend limiting the primary “fertilizer” for the bacteria that cause bad breath, namely sugar and grains that rapidly break down to sugar.

This means cutting down on processed foods (which are high in both grains and sugars), as they can cause odor-causing bacteria to grow out of control. Finally, practicing twice daily brushing (be sure to brush your tongue as well) and flossing, along with regular cleanings by your biological dentist and hygienist, will also help ensure that your teeth and gums are as healthy as they can be.

6 Natural Options to Freshen Your Breath

If you need to freshen your breath in a pinch and you have access to parsley, go ahead and try chewing it. You might be pleasantly surprised by the results. The six natural options that follow can also be used to give bad breath the brush off:

1.Cucumber: Placing a cucumber slice on the roof of your mouth may help to rid your mouth of odor-causing bacteria. According to the principles of Ayurveda, eating cucumbers may also help to release excess heat in your stomach, which is said to be a primary cause of bad breath.

3.Peppermint: Powdered peppermint leaves have been used historically to freshen breath and whiten teeth; you can even add a drop or two of peppermint oil directly to your toothpaste for added freshening.

4.Oil pulling: Swishing coconut oil around your mouth and “pulling” it through your teeth may help freshen your breath. One study found oil pulling is as effective as mouthwash at improving bad breath and reducing the microorganisms that may cause it.

5.Chewing sticks: Chewing sticks are simply twigs from trees with antimicrobial properties. Historically, a frayed end would be used like a toothbrush to brush teeth while a pointed end would act as a toothpick. Many tree species were used for chewing sticks, including tea tree, cinnamon, mango, and dog wood, although neem is probably the most widely known. If you are so inclined, chewing sticks are widely available today and their use is even encouraged by the World Health Organization (WHO).

6.Green tea: As mentioned, green tea was found to be quite useful for reducing bad breath. Researchers concluded, “green tea was very effective in reducing oral malodor temporarily because of its disinfectant and deodorant activities, whereas other foods were not effective.”

If you have any questions or concerns about your health, please call