Giving up sugar to rely on low-calorie sweeteners seems like a good idea for your diet. Those small packages often have 600 times the sweetness of sugar, ensuring your favorite food or beverage won’t be bland. But there’s a hidden danger connected to artificial sweeteners: Dr. Sabyasachi Sen, associate professor of medicine at George Washington University in Washington, D.C., authored a study that shows the use of low-calorie sweeteners may pre-dispose overweight individuals to diabetes.

If you are predisposed to metabolic syndrome, which includes high blood pressure, high blood sugar, unhealthy cholesterol levels, and abdominal fat — all things that lead to heart disease and strokes — then your risk of diabetes is also increased by three to five times. According to Sen, artificial sweeteners, especially in a person with metabolic syndrome, increase fat accumulation and can lead to diabetes.

Sen’s study looked at sucralose, the equivalent of three to four cans of diet soda per day, and found that transporters on the cell surface show more cell function when a person consumes artificial sweeteners. “Glucose rushes in when the gates are open,” he said. “And this causes inflammation.”

The study found that people who were already obese were the most likely to add fat cells. “If you are an athlete and normal weight, you can handle glucose,” Sen explained.

It is difficult to determine which chemical is causing the increased risk of diabetes, but Sen’s study used sucralose-based products, which are the newest on the market. He used a low-calorie, low-sweet mixture of sucralose in powder form that was diluted and added to cells. When quantities were increased, effects were even more pronounced.

In a separate experiment, biopsy samples of abdominal fat from people who said they consumed low-calorie sweeteners, primarily sucralose and a trace of aspartame and/or acesulfame potassium, were compared. The cells of the patients who were obese showed increased glucose transport compared to those who did not consume low-calorie sweeteners.

The FDA has approved five low-sugar products — saccharin, acesulfame, aspartame, neotame, and sucralose. One low-calorie product, Stevia, has also been approved. One of the problems with artificial sweeteners is that a small portion of a low-sugar product is much more intense than sugar, and a person can begin to use it more and more or may find normally tasty foods less appealing.

So, what should you do? According to Sen, both sweetened beverages and low-sugar drinks are bad for you. “If you just drink sweetened beverages, you are taking in sugar itself, but if you drink beverages with artificial sweeteners you are taking in greater quantities of glucose. I’m not saying we should replace artificial sweeteners — that’s even worse,” Dr. Sen added. “But consider an option like fizzy water.”

In other words, weight gain and metabolic syndrome can be a vicious cycle for some. You use artificial sweeteners and become more and more reliant on these products. The more you use, the more glucose your body produces. Foods rich in natural sugars like fruit don’t taste as good.

The other problem is that people tend to think that artificial sweeteners don’t pack any extra calories and so they may over-indulge in other sweetened products.

Remember We are in This Together!

Every time I make bread pudding, I chastise myself for not making it more often! Maybe it’s because I don’t always have extra bread around, or perhaps it’s because I’m never quite sure if bread pudding is supposed to be for breakfast or dessert. The last time I made this fall-flavored Apple Cardamom Bread Pudding, I realized something: I don’t have to have a plan for it! It’s delicious hot out of the oven for breakfast, and the leftovers can be served for dessert later in the day.

This hearty dish is perfect for cold fall and winter days. When the days start to get shorter and the air crisps up a bit, I find myself craving sweet, rich food. That doesn’t always work out too well for my waistline, though. Luckily, with recipes like this Apple Cardamom Bread Pudding, I can have my cake and eat it, too! You see, most bread pudding recipes are loaded up with excess sugars. It takes a lot of sugar to sweeten something as savory as whole-wheat bread. But, we found a brilliant workaround. Want to know how we did it? 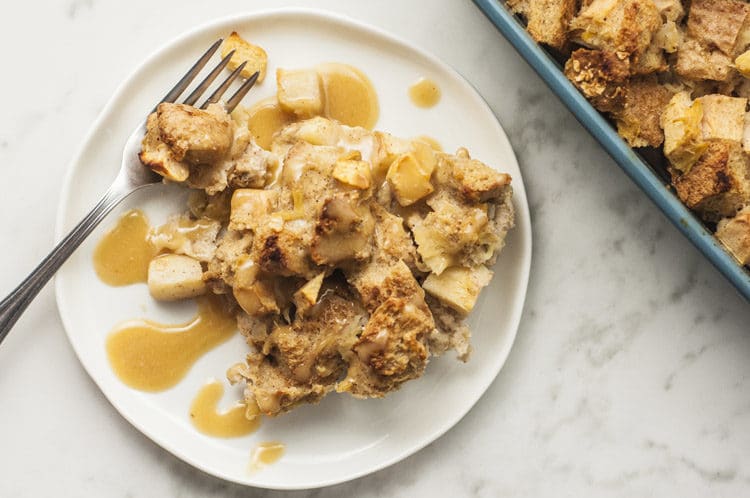 You might be surprised to learn that cinnamon and cardamom aren’t exactly sweet on their own. They sort-of trick our taste buds into thinking they’re a sweet spice. That’s because baking recipes almost always pair them with sugar. If you were to taste a pinch of them on their own, you’d find that they’re super pungent, slightly spicy, and a touch earthy.

But, when you combine them with something sweet, these spices really bloom. They actually help fill out our palates, allowing us to really taste any sweetness in the dish. Using these spices is part-one of our super-secret hack to make this Apple Cardamom Bread Pudding recipe more healthy. Part two: applesauce!

Instead of using a ton of processed sugar, we swapped in applesauce instead. It gives the bread pudding extra body while allowing the naturally sweet apples to shine.

We are in This Together