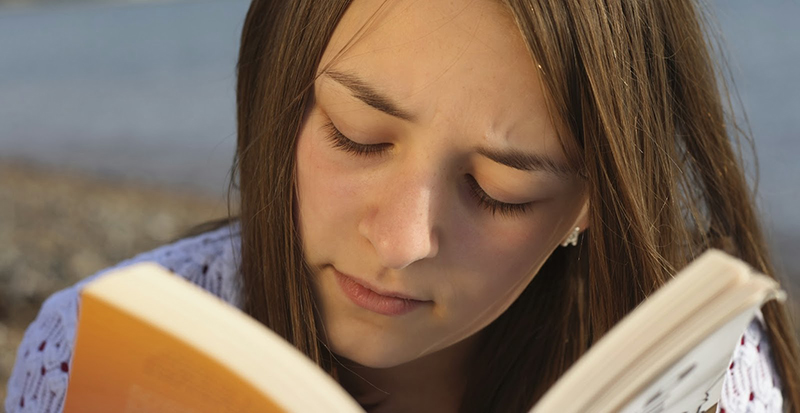 “Reading books may add years to your life”

Past studies have shown that reading books can benefit people in a multitude of ways, physically, mentally, and intellectually. Now in a new study, people who read a book for about 30 minutes a day were found to live approximately 2 years longer than those who didn’t read at all.

In previous research, curling up with a good book has been shown to improve people’s social skills by improving their ability to read the thoughts and feelings of others.

Researchers at the University of Sussex in England found that reading was “the most effective way to overcome stress” – even better than listening to music, having a cup of tea, or going for a walk.

Reading has also been proven to be a great way to keep the mind sharp, and may reduce mental decline by 32%, helping to prevent Alzheimer’s disease.

Still not convinced you should put down your smartphone and go grab a book? Well, cracking open the cover of one makes you smarter. In a 1993 study published in the journal Advances in Child Development and Behavior, researchers wrote:

“Certainly, our data demonstrate time and again that print exposure is associated with vocabulary, general knowledge, and verbal skills even after controlling for abstract reasoning abilities…”

By “smarter,” the researchers meant “having a larger vocabulary and more world knowledge in addition to the abstract reasoning skills encompassed within the concept of intelligence…”

What the New Study Says About Reading

For the new study, researchers from Yale University analyzed data on 3,635 people age 50 and older. The participants were divided into 3 groups – those who didn’t read at all, those who read up to 30 minutes a day, and those who read for longer than 3.5 hours per week.

Those who read the most tended to be women with college educations and high incomes. The researchers said that book readers appear to have a “significant survival advantage” over people who don’t read books. The study didn’t address whether reading on a Kindle or other tablet device counted, but it did find that book readers in general lived an average of 2 years longer than non-readers.

Specifically, the researchers found that people who read up to 3.5 hours a week were 17% less likely to die over the study’s 12-year follow-up period than participants who read no books. This was after accounting for the participants’ age, race, self-reported health, depression, employment, and marital status.

Compared with those who didn’t read books, those who read for more than 3.5 hours a week were 23% less likely to die overall.

A similar association was found among those who read newspapers and periodicals, but it was weaker.

The newspaper-readers tacked an average of 23 extra months onto their lives. Becca R. Levy, senior author of the study and a professor of epidemiology at Yale, said:

“People who report as little as a half-hour a day of book reading had a significant survival advantage over those who did not read.”